It is with sadness that we announce the passing of ABPA members. 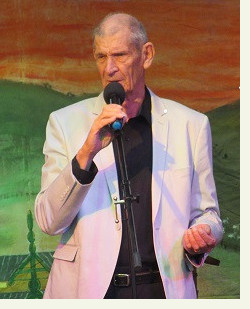 John Best
Our Best poet is gone.
Long John Best finally succumbed to his long-suffered respiratory condition on Sunday morning 29th May 2022. He was 84 years old.
John was a highly awarded performance poet and writer having performed all around Australia and even represented Australia at the Cowboy Poetry Gathering in Elko Nevada, USA. His dry wit and humour made him a popular performer and his towering physique made him easily recognisable in any crowd.
A stalwart of the North Pine Bush Poets, John contributed to many festivals, events and fund-raisers. As an ex-serviceman, he gave freely of his talents at many Anzac Day and military commemorations. He was also very encouraging of new poets and performers, assisting in whatever way he could.
With his humour and readily expressed opinions he was an easy conversationalist and a great bloke to be around. He’ll be sorely missed.

Terry Regan
2007 Australian Male Champion bush poet Terry Regan passed away on 23rd February 2021. One of Nature’s gentlemen, Terry had a rich deep voice and was an outstanding performer. He and his wife Dulcie (deceased) travelled widely through Australia, attending poetry events and spreading the joy of bush poetry. Terry will be sadly missed. 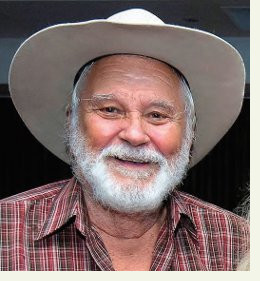 Hal Pritchard
ABPA past-president Hal Pritchard died on 18th January 2021 at age 79. For over a decade and a half, Hal brought his diverse background experiences and managerial skills into the poetic arena and his consequent contributions to the ABPA were significant.
As well as travelling Australia for nine years as an administrator, a performance judge and workshop co-presenter, Hal served as ABPA President in 2014 and 2015 and as Vice-President in 2016.
Hal is mourned by his poet wife of 54 years, Brenda Joy (who he supported in every capacity) by all the members of both sides of their loving family, and by friends and associates world-wide. 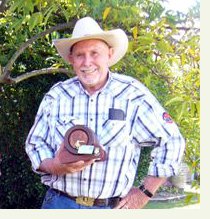 Lynden Baxter
Respected ABPA bush poet Lynden Baxter from Monto Queensland passed away in Bundaberg on 23rd June 2017.
Lynden was the 2016 Clancy’s Choice overall male winner at the Man From Snowy River Festival in Corryong Victoria on his first visit to that festival. He was also 2015 Queensland Male Bush Poetry Performance Champion at the Bundy Muster, and is in fact still the holder of that title. He and his faithful dog Dusty were well known to many.
North Pine Bush Poets member John Best wrote, "Lynden was a great bloke, wonderful writer and performer and will be sadly missed by all who were lucky enough to meet him."
He will be sorely missed and our sympathy is with his family.
A graveside service was held on Saturday 1st July at the Monto Cemetery. 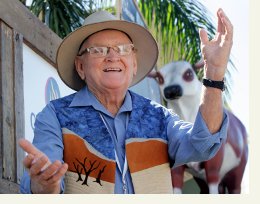 John Major
It is with great sadness that we report the sudden and unexpected death of one of our long-time stalwarts, John Major on 12 January 2017. John shared his love for bush poetry with adults and children throughout Australia for many years. The Aussie Bush Poetry community is poorer for his loss and our sincere sympathy goes to his family at this sad time.

Milton Taylor
15.06.43 – 16.05.15
Without doubt,  the greatest poet of modern times in this country. He wrote and performed ‘people’s poetry’ – from witty gems to literary masterpieces, some utterly hilarious and others incredibly moving.
His works are recited and loved by people of all ages and all walks of life throughout Australia and in the United States, where performance tours took him for ten years.
He was immensely humble, sharing his talent to inspire many other poets and bringing the sheer joy of poetry to children.
Milton remained a man of principle, wit, honour and courage to the very end.
Many of his award-winning poems appear on the poetry page of this site. You’ll see above that Milton was five-times Australian Champion — more than anyone else.

Cliff Hathway
Cliff Hathway was a true gentleman who helped start the Tamworth Poetry Reading Group along with Maureen Quickenden back in the early 1980s. He passed away on 13 February 2015.
Cliff, along with his family, worked in the poultry industry around the Tamworth area and knew all of the local bush poets over a thirty year span.
Cliff would recite poems at the monthly poets gathering at Tamworth and attend reunions to celebrate the love of Australian Bush Poetry.

“We held Cliff’s funeral here at Strath Holm, his family’s home for 3 generations.  It was a beautiful setting and everyone said it was the loveliest funeral they had ever been to.  He would have been pleased. A fair bit of poetry too.” 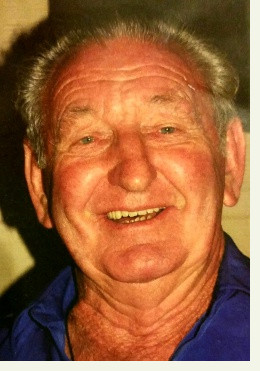 Harold Cunningham
16/02/1935 – 18/08/2014
From his first encounter with bush poetry in Tamworth in the early 1990s, bush born and bred Harold and his wife Margaret were (Margaret still is) very staunch supporters and members of the ABPA.  They travelled many thousands of kilometres to as many bush poetry competitions as possible.  Ably assisted by Harold, Margaret (with permission) could always be seen in the front row videoing as many artists as she was permitted to film.  Also, she was always the first to the product table to purchase cassettes, CDs, videos or DVDs to add to their vast poetry collection.
Margaret is determined to continue to support our genre but Harold is sadly missed.
Belatedly, bush poetry says goodbye and thank you to “every poet’s greatest fan”.